Independent scholar and author Martha Lou Perritti began her writing career when most people start thinking about slowing down. She was 50 years old when she ventured into writing and book publishing.

Her first works were popular cookbooks. Cooking Our Way (Morris Press) was published in 1993. A second cookbook was written and published again by Morris Press in 1998, 1999 titled, Martha Lou’s Kitchen.

But it wasn’t until Perritti moved to quiet Pine Island, Florida that she began her first historical novel. The story was about her father who lived to be 101. After several years of research and writing, she published Crossing in the Rain (Lifestyles Press). 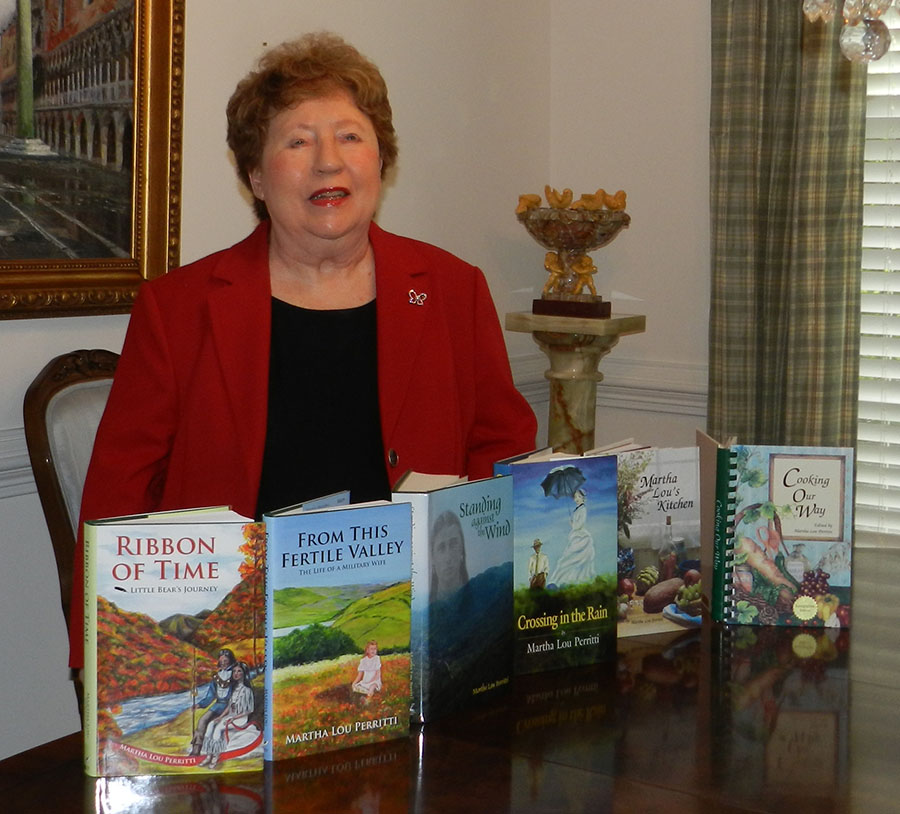 The story about Perritti’s father fascinated not only her readers but came as a revelation to many of her family members. Martha Lou discovered her father had several families, and that she had 13 siblings instead of the nine brothers and sisters in her family. In Crossing in the Rain we meet each of those families.

After reading her first novel, many readers expressed a desire to learn more about Martha Lou’s mother. In the early research stages about her mother, Perritti’s focus shifted dramatically.

Her fact-based story begins in the Cumberland Gap and follows the path her Cherokee family unfolds. The reader travels through early Native Americans living peacefully in the Carolina mountains, to the treacherous Trail of Tears, the Civil War and to the final removal of Native Americans from Martha’s family homestead in the Caddo Mountains of northern Alabama.

In 2006, Perritti presented a signed copy of Standing against the Wind to officials with The Smithsonian and The National Museum for the American Indian.

Continuing the story of her family-centered novels, Perritti released the third book in her historical series: From This Fertile Valley in 2010.

From This Fertile Valley is the culmination of Perritti’s trilogy of self-discovery. As a young mother, military wife and budding writer, she travels the world sharing her innate ingenuity, intuition and appreciation for nature with others.

Martha recently completed her fourth book in the series: War Eagle Texas Cherokee, which continues the story of War Eagle from Ribbon of Time.

Martha currently is dedicating time for speaking engagements and book lectures. An excellent speaker, the diminutive Perritti will take you on her fascinating journey, offering tips on finding your own personal heritage. She has proven to be much like her Cherokee ancestors — steady and calm, displaying a solid sense of purpose when a goal is laid out before her.

“If I can start a writing career at 50, anyone can. My life has been a summation of the attributes of my Cherokee and Irish legacies. Benefiting from the inner strength of my ancestors, I follow my own path.”Martha Lou Perritti